It’s been quite a year! Lots of highs and lows. Numerous stops and starts. Unexpected tears and endless laughter.

We’ve been to the pediatrician, the therapist, the pediatric endocrinologist, the pharmacy, the lab (for blood work), the courthouse and the passport office. Hunter started on testosterone, experienced his voice changing, grew a little taller and even began to have more of an appetite (some days) especially when the day started with three slices of homemade French toast dipped in real maple syrup.

Not only did we officially begin using male pronouns, but Hunter got a revised birth certificate, a new passport and a legal name change. He sailed through driver’s ed and is the proud owner of a “permit” with his legal name and male gender marker.

Hunter’s confidence swelled in direct proportion to the amount of love and acceptance he received from family, friends, the community — strangers he may never meet.

Leelah Alcorn committed suicide because she could no longer live with parents who insisted on calling her a he knowing they would never acknowledge the girl she was born to be. Ally Moms was born. Jay Ralko lost his battle with his demons. I spoke to a room full of Jay’s friends assuring them, that as a mom, I would love our transgender children, always.

We shared our journey publicly. Hunter’s story appeared on the cover of The Detroit Jewish News, The Detroit Free Press and USAToday.com. We organized an event for transgender youth and families where attendance exceeded our wildest expectations as nearly 250 spilled out into the chapel lobby. We founded a non-profit organization, Stand with Trans, to benefit and support transgender youth (and their families) so kids would have the tools to feel confident, validated and loved.

What a ride this past year has been. What a surprising 16 years. From the much anticipated birth of our second child to tom-boy tantrums, academic angst and social anxiety, Hunter has become a true mensch. He has come into his own over the last few years. He doesn’t focus on the rough patches but on the fact that he has gotten past them. The transformation from an unhappy, moody, withdrawn, dysphoric adolescent to a positive, loving, open, confident 16 year old has been nothing short of remarkable.

Hunter is kind and caring. He is compassionate. He understands that his weekly time at the Friendship Circle means so much more than just an after school activity. He is tolerant and patient with those less nimble. Hunter is not your typical 16 year old in many ways and very much a teenager in others. He knows what he likes from music to television to video games. He is not influenced by his peers. He has worked really hard to be who he is at this moment in time. 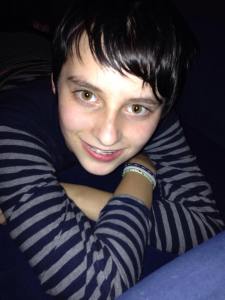 Together, we have traversed the past year. As his mom, I showed Hunter that he was loved unconditionally. He knows that even when I am angry or disappointed (in a choice he made) I will ALWAYS love him. I will NEVER turn my back on him. I will FOREVER be his champion.

Hunter, happy 16th birthday, son. I cannot wait to see what the next year will bring. You are a beautiful soul, a piece of my heart, a force to be reckoned with.