When my kids were little there was no such place as a “family” restroom. If a diaper needing changing or a toddler-in-training needed a potty, it was generally me who rushed to find a Ladies Room. The Ladies Room was where the diaper changing stations were. Rarely, was there any accommodation for the dads who just happened to be out and about with the kiddos.

Fast forward a few years and we had a real dilemma. The girls were getting too old to go into the Mens Room and dad didn’t feel completely at ease letting a five year old go into a public restroom by herself. Those family rooms would’ve come in really handy.

Now, of course, architecture and planning has caught up a bit. Along with the need for unisex “handicap” facilities, it is recognized that dads do take their kids out on errands, various activities and the like; and different family structures necessitate more forward thinking public spaces.

About a year ago we attended my niece’s dance recital. There are two restroom choices closest to the auditorium; Ladies and Mens. Olivia, not going by Hunter as yet, though dressed in a ball cap, jeans and t-shirt, was waiting patiently in the Ladies Room line. A soft, yet insistent voice of an older woman, “honey, I think you are in the wrong place.”

Olivia, not sure that she was the one being addressed, continued to wait. A little louder and more emphatic, “this is the Ladies Room. You are in the WRONG line.” Talk about creating paranoia in an already socially anxious kid with body dysphoria.

Now, realizing that she was being spoken to, Olivia was in a quandry. Give up the place she’s been holding for several minutes, stand her ground, or quietly leave without further embarrassment. Before she could fully weigh her options, another recital-goer turned to the busy-body offender and said, “she is right where she’s supposed to be.” I have no idea who that woman was, why she stepped in, or what was going through her mind, but I owe her a huge THANK YOU for being my child’s advocate.

This is one of the issues that trans people face daily. In California, transgender students can play on sports teams and use the locker rooms and restrooms of the gender in which they identify. Seems simple. Not really. What about school trips that involve overnights? Camp? Shopping malls? Birthday party sleepovers? 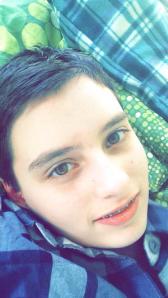 We have already navigated much of this. Fortunately for Hunter, there has been no discrimination and very little turmoil over this. He has guy friends and girl friends. They have sleepovers and really don’t see him as Hunter, formerly Olivia. They see him as a really cool kid that is working on living an authentic life. They see him as a creative, witty, scream-o music loving, guitar playing, drum banging teenager.

The next time you see someone who looks like maybe they don’t belong, think twice before you comment or form a judgement. Please.

3 thoughts on “In the Wrong Line”