I remember a day, many, many years ago, when I went with my grandpa to do some errands. I was about ten years old. The day had so much promise. I loved my grandparents more than anything and any opportunity to see them, together or individually, was met with joyous anticipation. Unfortunately, my memory is not all that great and I honestly can’t remember most of what we did that day, more than forty years ago. However, there is one specific moment of that day that stands out so vividly; I can recount what I was wearing, what was said and how that moment made me feel.

Among our stops that day was the barber shop. My grandpa needed a haircut and couldn’t wait to show off his granddaughter to the barber. We walk in (I am on top of the world) and before my grandpa could even introduce me, the barber says, “Ira, I see your brought your grandson with you today.”

Grandson?! Was he talking to us? I was MORTIFIED. I was definitely NOT a boy. I was very much a girl. That was a certainty.

In all fairness to the kindly, old barber, I was wearing levi’s (girls back then didn’t often wear jean-style pants) and had recently gotten a very short “pixie” haircut. At ten, girls and boys don’t look much different – it’s the clothes and hair that creates the perception of gender.

By the way, the barber felt terrible that he had mistaken me for a boy but I have never forgotten how I felt being identified as the wrong gender.

My son is transgender. He has known for quite a while that he is a boy. Of that he is as certain as I was at ten, out with my grandpa, knowing that I was a girl. When he goes out there is a certain amount of anxiety as to whether he will “pass.” Though his confidence builds with each passing day, I am guessing that there will always be a little voice in the back of his head questioning and wondering if people will see him the way he wants to be seen.

Try to imagine how you would feel if every time you went out, people thought you were someone other than who you knew you were. You might need to read that sentence a couple of times before it makes sense. 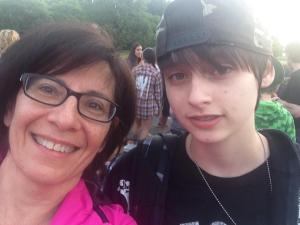 It takes an incredible amount of courage for a trans individual (whether MTF or FTM) to live as the gender they affirm. For Hunter, the past year has been an evolutionary process. He slowly changed his manner of dress, his hair, his visual identity.

I’ve been thinking a lot recently about the adults who grew up in a time when they couldn’t be anyone other than their assigned gender. Now, as adults, they are finding the courage to live differently. It is a BIG deal for a forty year old who has been living life as a man to make the hard, brave decision to go out for the evening dressed as a woman. Think about that. The next time you are out and find yourself staring a little too long wondering if the person seated across the restaurant from you is a man or a woman, remember that he or she is a human being first. The road they’ve travelled has likely been difficult and fraught with rejection, uncertainty and insecurity.

The next time you are wondering about someone else’s gender or choices, remember how certain you are of your own.

16 thoughts on “Living Your Gender”