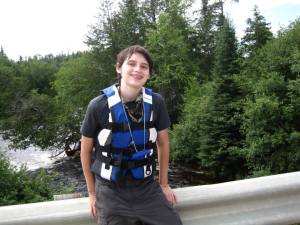 For FtM trans guys, one of the things that is high up on the list of wishes is to have a masculine chest. This means a “boob-free” upper anatomy. Guys who are born anatomically male get to swim without a shirt on. They get to shower without having to hide their chest. They get to see a body that matches their identity.

Trans guys who are pre-op not only have to swim with their shirt on but with a chest/compression binder as well. Not only do these guys have to endure the binder to hide their breasts, but now they are wearing two layers of wet stuff clinging to their upper half.

As a parent of a trans teen we are facing the reality of our son undergoing surgery. No parent wants their child to have major surgery — for any reason. In this situation, however, surgery will make a difference in the way Hunter is viewed, the way he views himself and how he feels as a human being.

Hunter recently turned 16 and is dreaming of a time when he can swim without a shirt or be a camp counselor  and not worry about showering or having to cover up his upper half. Top surgery for Hunter will be life changing. Planning for college and what kind of housing he will have access to will be made simpler if his body is beginning to match up to his gender identity.

When Hunter first came out to us he was in a hurry to get started with hormone therapy. This, in his mind, was what he needed to begin his journey to manhood. We understood that he had been researching for quite some time and trying to find just the right time to come out to us. And, even though our goal from the beginning was to support his transition, we needed time to process, research and understand before we could give the green light to any eventual steps.

Planning for top surgery is one of those steps. As a woman, it is difficult for me to understand. As a parent, I can barely stand to think about it. However, for Hunter, having breasts is an undesirable by-product of being born with female parts while identifying as male. Having “boobs and a vagina” (as he puts it) causes a significant amount of body dysphoria. He has good days and bad days. I am thankful for the good days and concerned for the bad.

While we are not rushing this process, we are starting to talk about it. Michigan is not one of the states that covers this surgery. Some private insurance plans offer coverage for transgender services. We are not so fortunate. It is costly and definitely not something we planned for.

For those who are unfamiliar with FtM “top surgery,” the procedure not only removes the breasts but shapes the chest to look masculine. This man-sculpting is an art-form that trans guys can only achieve through an expert surgical procedure. Trans guys are willing to have difficult, often painful surgeries so they can emotionally feel more like the gender in which they identify.

Hunter recently said that “looking in the mirror is always a surprise.” In his mind, he is male and is often shocked by the image looking back.