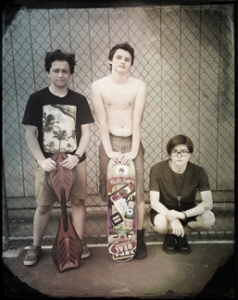 This past weekend I participated in organizing a “family fun picnic” in a neighborhood park. The gathering was intended to celebrate families with transgender children. Allies were welcome as well as trans adults. This was the first Stand with Trans event of its kind. There were about 60 people sharing food, enjoying the beautiful summer day, laughing, exchanging stories and just being. There were quite a few families with young children who ran and shrieked and played until they were dripping with exhaustion. The older kids hung out. They made use of the skate park, tossed the Frisbee and inhaled hot dogs and cookies, not necessarily in that order.

To anyone passing by, this was just another neighborhood barbecue. Boys and girls of all ages were playing and connecting; new friendships were being formed by young and old alike. The sun was out, a gentle breeze was blowing and there was an abundance of food. We couldn’t have asked for a better day.

The truth is, this family fun day was just “another neighborhood barbecue.” It just so happens that most of the kids attending identify as a gender other than the one they were assigned at birth.

Just as it’s impossible to know someone’s story by looking at a photograph, it would’ve been impossible to know that the group gathering under the picnic shelter was discussing transition (medical and social), available resources for transgender kids and school acceptance, or lack thereof.

While a photographer’s snapshot captures a moment in time and has the ability to tell a story, it is the story that the artist paints through his or her individual lens that we take away. Have you been to a museum or art gallery where you first take in the artist’s work and then read the placard? What you see and imagine is often not what is described.

When someone comes out as transgender, only that person can truly know how things are going, what is happening in the privacy of their home, or where their transition is heading. I looked at the kids yesterday with the intimate knowledge of many of their personal stories.  An outsider would have no idea.

I watched a few of the transgender teen boys yesterday. Observed them. It seems they come together like members of a secret club. There isn’t a special handshake or notes penned in invisible ink but rather a shared understanding; a common bond formed regardless that each journey is unique unto itself. There’s an authentic empathy that pervades.

As the mom of a trans son, I know what it’s like for another parent who’s just been stunned with the news of her child’s coming out. I do not know, however, what it’s like to be my son. No matter how loving and supportive I am, I will never know what he is going through. As Hunter’s mom, though, I can reassure others; let them know that they are not alone. I can’t, however, know their whole story. To anyone passing by, it seems that the family heading to the movies or to church or to the beach is just like any other.  To a family raising a transgender child they are nothing like any other.

For one afternoon, these families could let their story unfold within the safety of the park’s shelter. The photographer’s lens captures what we want to see and only reveals what we choose to share.